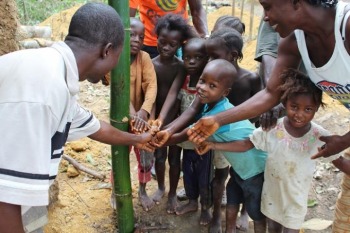 This post was originally published on End The Neglect.

Everything changed with Ebola.

For four years, Global Communities had been busy creating access to safe sanitation for communities in Liberia, helping to fight the spread of disease and improve health outcomes. Utilizing Community-Led Total Sanitation, we were making consistent progress, beginning work through the USAID-funded Improved Water, Sanitation and Hygiene (IWASH) program in 2010 in the three Liberian counties of Nimba, Lofa and Bong. Our program gained the support of the national government, and we worked with them to develop their sanitation strategy to improve the health of rural communities across the country. By early 2014, we had helped 284 communities become “open defecation-free” and were working with more communities.

Suddenly we and our partners in the Liberian County Health Teams and the Ministry of Health found ourselves at the center of a maelstrom. To combat Ebola, we scaled up our community engagement work, training community leaders who were already working to prevent open-defecation in how to provide information about Ebola prevention. As the epidemic swelled, our community engagement approach shifted again, focusing on acceptance of vital services like dead body management, and eventually, health screenings. In just a few months, our work scaled up from three to all 15 Liberian counties.

It was during this time that we received reports of an astonishing statistic. All 284 open defecation-free communities were reporting that they were also Ebola-free — despite being located in some of the regions hardest hit by the virus.

Was there a link between being open defecation-free and Ebola-free? Or between our program’s process and Ebola resistance?

Earlier this year, we employed two independent public health consultants to conduct research into the informal reports we had received. They came back with extraordinary findings. Focusing their research on 551 households in Lofa County, they established with a representative sample that the communities that had reached open defecation-free status were indeed Ebola-free.

They also found that communities that had only started the Community-Led Total Sanitation process — but not reached full open defecation-free status — were 17 times less likely to experience a single case of Ebola. This suggests a statistically significant correlation between our work to become open defecation-free and being Ebola-free.

Still, it would be wrong to assume that these findings mean that simply becoming open defecation-free stops Ebola. Rather, they suggest that people who had been exposed to the program’s education were far more likely to develop healthier behaviors and practices that lead to Ebola resistance — especially when led by a member of their own community.

Perhaps most encouraging, these behavior changes don’t just defend against Ebola. By utilizing CLTS, individuals can help prevent a variety of water, insect-borne and diarrheal diseases, including many neglected tropical diseases. In addition, such methods are inexpensive; in Liberia, incentives of only $130 per community can result in far better sanitation practices. Make household latrines, hand washing facilities, garbage pits and dish racks available, and you have a safe, hygienic and resilient community.

Disease spreads at the community level, and only by engaging with the community to create sustainable change can we hope to control and eliminate many of the diseases that are so prevalent in the developing world. CLTS does just that, and any focus on water and sanitation must recognize the importance of empowering communities to make wise decisions to help improve their health.