WASHINGTON, D.C. – April 25, 2017 –  Tonight, the Sabin Vaccine Institute (Sabin) will honor Dr. Jan Holmgren with the 2017 Albert B. Sabin Gold Medal Award. Dr. Holmgren will be recognized for his pioneering contributions to oral vaccine research and mucosal immunology, as well as his leadership in the discovery of the world’s first effective oral cholera vaccine.

Cholera is an acute diarrheal disease transmitted through contaminated food or water. For young children and those without rapid access to treatment with intravenous fluids and antibiotics, severe cases of the disease can be fatal in as little as six hours. Cholera kills an estimated 93,500-143,000 people worldwide and sickens 2.9-4.3 million annually, due in large part to lack of clean water and inadequate sanitation. 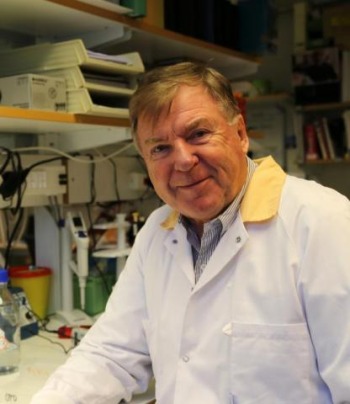 Jan Holmgren, MD, PhD, developed the world’s first effective oral cholera vaccine, and has continued to make significant contributions to the field through his pioneering research on oral vaccines and mucosal immunology. In the 1980s and ‘90s, Dr. Holmgren and colleagues at the University of Gothenburg developed the Dukoral™ oral cholera vaccine, which became the first internationally licensed and World Health Organization (WHO) prequalified oral cholera vaccine. The vaccine, which was tested in large field trials in Bangladesh, Peru, Mozambique and Zanzibar, reduced cholera by 85 to 90 percent in the first six months after vaccination. Unlike previous injected cholera vaccines, which conferred weak protection for only a few months, Dukoral™ oral cholera vaccine continued to provide immune protection for three years after immunization. In addition, the vaccine gives indirect protection to unvaccinated individuals by reducing their risk of exposure to cholera.

Dr. Holmgren and his colleagues later shared their data and technology with researchers in Vietnam and India to facilitate the development of a lower-cost version of the oral cholera vaccine, Shanchol™, which is now prequalified and stockpiled for international use by the WHO. Shanchol™ was used as part of the response to the 2010 cholera outbreak in Haiti, which helped avert an estimated 315,000 cholera cases and 3,100 deaths. Dr. Holmgren continues to provide technical assistance to manufacturers in India, Bangladesh, Vietnam and Korea to produce the vaccine, as well as further improved versions at a much lower cost.

“Jan not only led development of the first oral cholera vaccine, he has also devoted his career to the continuous improvement of these vaccines,” said Amy Finan, chief executive officer of the Sabin Vaccine Institute. “Throughout Jan’s distinguished career he has collaborated with scientists in endemic countries to save lives in the most challenging conditions. Their innovative work resulted in an improved vaccine that is being used in Somalia today to stem a deadly outbreak of cholera.

“Jan exemplifies the values of Albert Sabin and shares his commitment to protect every child from vaccine-preventable diseases. It’s an honor to present Jan with this year’s Albert B. Sabin Gold Medal Award.”

“I am honored to receive this award commemorating Dr. Sabin’s extraordinary legacy,” said Dr. Holmgren. “It is indeed a great honor for me to have been chosen to join the distinguished group of eminent scientists who have received this award before me.”

The 2017 Gold Medal Award ceremony will take place at the National Academy of Sciences Building in Washington, DC. His Excellency Björn Lyrvall, ambassador of Sweden to the United States, will offer remarks at the ceremony, along with Amy Finan and Bruce Gellin, president of global immunization at Sabin. The ceremony will also convene leaders in academia, government, industry and civil society.

Awarded annually since 1994, the Albert B. Sabin Gold Medal Award recognizes a researcher who has made extraordinary contributions in the field of vaccinology or a complementary field. The award commemorates the legacy of Dr. Albert B. Sabin, who developed the oral live virus polio vaccine that is widely heralded with making a huge contribution to the near eradication of polio worldwide. This year marks the 24th year that the Sabin Vaccine Institute has bestowed the award. Past participants of this award include D.A. Henderson, Maurice Hilleman, Roger Glass and Ciro de Quadros, who later served as Sabin’s executive vice president and director of Vaccine Advocacy and Education.

Click here to learn more about Jan and his career.

About the Sabin Vaccine Institute

The Sabin Vaccine Institute is a leading advocate for expanding vaccine access and uptake globally, advancing vaccine research and development, and amplifying vaccine knowledge and innovation. Unlocking the potential of vaccines through partnership, Sabin has built a robust ecosystem of funders, innovators, implementers, practitioners, policy makers and public stakeholders to advance its vision of a future free from preventable diseases. As a non-profit with more than two decades of experience, Sabin is committed to finding solutions that last and extending the full benefits of vaccines to all people, regardless of who they are or where they live. At Sabin, we believe in the power of vaccines to change the world. For more information, visit sabin.org and follow us on Twitter, @SabinVaccine.

Sabin Statement on the End of the Uganda Ebola Outbreak